Chicago Jazz Philharmonic made its Symphony Center debut performing a Symphony Center Presents Jazz commissioned work that celebrates the Chicago River and the impact it has had on making Chicago an American metropolis. The work is inspired by previously unpublished photographs from Richard Cahan and Michael Williams’ new book, The Lost Panoramas: When Chicago Changed Its River and the Land Beyond, which document how Chicago sacrificed the natural environment in order to survive and prosper by reversing the flow of the Chicago River. 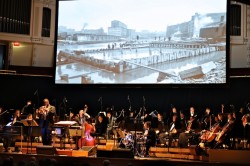