From Russia (Belarus) to South Lawndale 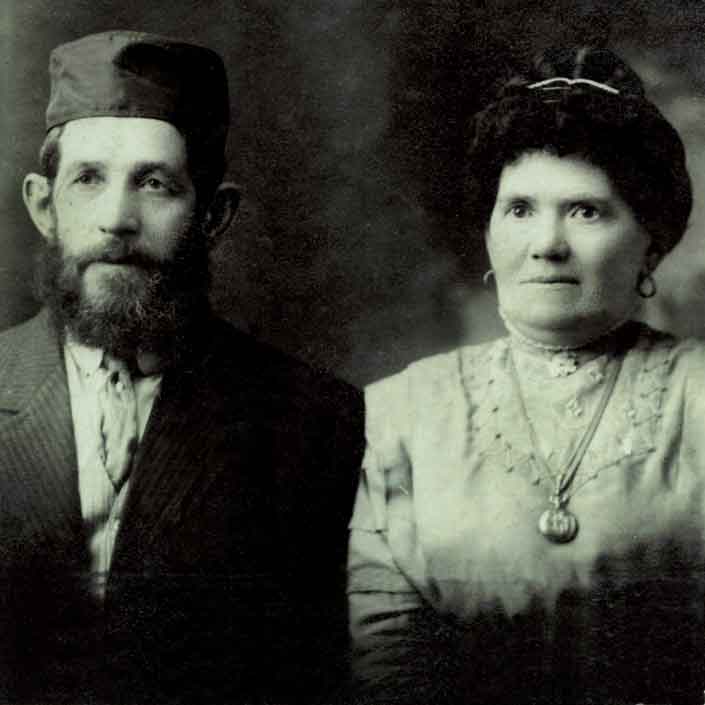 My great grandparents David and Minnie Taitsch (pictured) emigrated to Chicago from Russia (now Belarus) in 1907. A few months after David arrived, Minnie followed with their three remaining children, our grandfather among them. They settled in South Lawndale. Older children had been sent in earlier years, including Rose, whose story my sister Marla Deutsch wrote beautifully for a story telling class, and who has granted permission for that story to be published here.

“Goodbye, Papa . Beautiful Mama, goodbye. Be good Moishele and Uechele; grow strong! Please don’t cry, Mama, I will be well! Soon you, Papa and the youngest ones will come, and Baruch Hashem, praise G-d, again we will be together and in Dy gyldʻnʻ medinah, the golden land, in America!”.

I fought valiantly not to cry as I said my last goodbyes to Papa and Mama, and to my precious younger siblings. I was leaving Danilowitz, the shtetl, or Russian village, in which I was born and raised. How long would it be before I ever laid my eyes again upon their beautiful, familiar faces?

Mama knew life was hard in this golden land of America. By 1906 I had six brothers already living there; Eddie, Schmuel, Jacob and Herman were barbers in Chicago, Mordche was a laborer in Akron, and the oldest, Abraham had made it all the way to Spokane, Washington, where he peddled scrap metal. Each brother left by age 17, least he be found and drafted into the tzar’s army, a particularly horrid fate for those of Jewish heritage refusing to convert. Two of Mama’s prized possessions were a pair of photos Eddie and Schmuel had recently sent home, of themselves in Chicago, standing one behind the other, dressed in their Shabbos, their Sabbath, best.

In one photo, Eddie was in front, wearing a sumptuous silk vest with shimmering, carved ivory buttons, that on Mama’s closer inspection, was missing a bottom button. In the second photo, it was Shmuel in front, wearing the same vest with, yes, the same missing button. Mama quickly deduced that money was tight- only enough to buy one vest for the two of them, and not enough to fix the button. Yes indeed. You had to get up pretty early in the morning to fool Mama!

In 1907, it was my turn to go to America. I was seventeen and it was decided I should bring with me, a most beautiful feather bed, as my dowry. This dowry would have been considered quite handsome in Danilowitz- I could have had my pick of fine men, if only some had escaped the tzar’s loathsome draft and remained in town in full health and capacity! But to bring it to America was not going to be easy! The problem was, being only about five feet tall and less than a hundred pounds, this dowry was larger than I was, and almost as heavy!

Can you see me as I schlepped it, over the Russian border into Germany and all the way to the port of Bremen? Trust me, I tell you that lovely, priceless bed got heavier and more cumbersome with every step of every meter. Oy vay! Definitely not a piece of cake! Upon reaching Bremen, I knew had a big decision to make. Either I would stay in Bremen with my bed, or make it to Dy gyldʻnʻ lʼand without my dowry. Well, the bed lost. I dumped it. Juggling my luggage just got a whole lot easier!

After sailing several weeks at sea, I arrived in Baltimore, where, being declared fit after being examined by the doctors and questioned by the immigration officials, I quickly boarded a train to Chicago. My four big brothers, would be meeting me as I disembarked at Union station. As much as I was missing terribly my dear parents and the little brother and sister that I had left behind, I was still looking forward to seeing the big city of Chicago and reuniting with the boys! I was absolutely ready for the open arms with which Chicago and its streets of gold would surely welcome me.

Imagine my excitement when I heard the conductor announce, “Union Station, Chicago!” I glanced out the window and saw my brothers, furiously waving and clapping, big smiles across their beaming faces! No longer did it matter that I was strange in this new language, strange in the town, and could not read or write!

Rapidly, I gathered my belongings, and headed for the door, delighted to finally begin the rest of my life in this new, foreign land! “Raschele, RascheIe!”, my name rang out from their tongues. Eagerly, I stepped off the train and into their waiting arms.

In dismay, I looked about me. The wooden slats that made the sidewalks were waterlogged with filthy snow, and mud. All kinds of vermin were scurrying underneath them, flashing their wicked tails and threatening to poke their noses up at us! The sky was thick with dirty smoke from the steel mills and the air stank with the fumes billowing from their smokestacks. These new scents mixed with the fetid aromas of slaughtered cattle in the nearby stockyards. Polluted runoff from the factories streamed into nearby Lake Michigan, and into the Chicago river.

“Uck”, I told my brothers, “this place is filthy- I’m going home!” I was ready to turn right around, march back on the train, and start back to Danilovitz, which despite being under harsh and cruel tzarist rule, had green hills and valleys, clear streams and fresh air! With luck, I may even be able to find again that drastically dumped dowry!

Baruch Hashem, praise G-d, my brothers held me tight and refused to let go until after the train had left the station for its next stop!

Lucky for me they did, or I never would have married, three short years later, my dear husband, my Aron! And aiy, a most perfect mensch, he was! Many years of blessings awaited us in Dy gyldʻnʻ mediah!